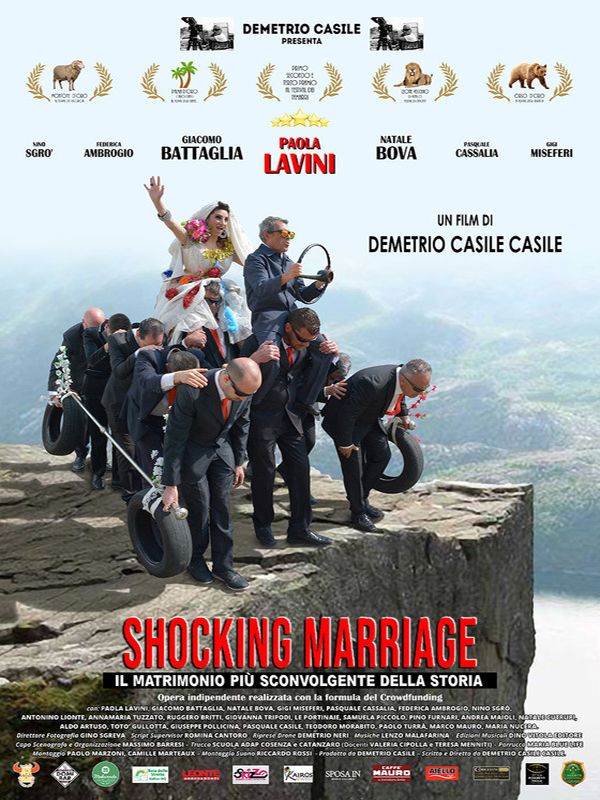 The story expresses its social value as it brings out the new ways of thinking of young people today, and specifically their effort to put culture and knowledge in the place of violence, oppression and authoritarianism. The movie stands out as a satirical dissection of the Mafia and its underworld, which is based on abuse and social injustice. The result is an ironic, original, amusing tale, mixed with musical and occasionally surreal elements. Adopting a humorous tone and an intentionally campy style, the story revolves around the wedding of a godfather’s sister – a beautiful woman whom no one dares to romance for fear of her brother – and the shyest boy in town. A series of hilarious events transforms the boy’s terror into the deepest affection for his bride. The same happens to the girl, whose life undergoes a gracious metamorphosis. Right after the wedding, the groom takes the place of his brother-in-law in the local mob. With his wife’s help, he turn the despotic, violent ways of the previous godfather into a system of compassion and justice for the whole community

ENGLISH CURRICULUM
Casile is Professor of Painting and Visual Education at the Institute of Fine Arts of Bologna. He is also Professor at the University of Bologna Primo Levi (p. 16). He is also the Artistic Director of the Calabria Film Festival (p. 13) and the Premio Internazionale di Scultura “Sandoni”.(P. 13)
Casile is also the inventor of Cineshow and the Salone Internazionale del Cinema in Turin.(P. 13), Screenwriter and Director he has worked alongside directors such as Comencini, Squitieri, Bolognini, Tessari, Michelangelo Antonioni, and Wim Wenders. (From p. 4 at p. 11)
Film writer, won the Solinas Award 1986 for best screenplay with “UN RAGAZZO DI CALABRIA” film directed by Luigi Comencini (Golden Lion at Venice, 1987) and starring Gian Maria Volontè, Diego Abatantuono, Giada Desideri and Therese Liotard.(P. 6-7)
In 1993 he released his first novel entitled “Around the TREE the STUPID” . edited by the publisher Lo Scarabeo. (P.14)
In 1997 he wrote and directed the film “Between Scylla and Charybdis” released nation wide in Italy in 1998, produced by Fulvio Lucisano and distributed by Italian International Film. .(P. 9)
In 2003 Casile wrote for Hollywood the screenplay for the film “the PHARAOH of the SANDS”, based on the novel by VALERIO MASSIMO MANFREDI published in Italy by Mondadori. .(P. 4)
In 2004 with Valerio Massimo Manfredi, Casile wrote the screenplay for “ the “Memorie di Adriano” by Yourcenar, a novel that is about to become a film directed by John Boorman. .(P. 12)
In 2003 he founded the nuova SCUOLA LIBERA DEL NUDO “that in just one year has 280 members with over 30 models (p. 17)
In February 2012 was invited by the Academy of CINEMA and Television of Cinecittà in Rome to hold the lesson EXCELLENT DIRECTING and ACTING.(P. 16)
In 2011 has published his second novel “LA RIVINCIATA DEL NUMERO CINQUE’ (p. 14)
In the 1980’s Casile collaborated with the newspaper Il Resto del Carlino publishing articles and illustrative vignettes.(P. 21)
Later realizes regie, stands and posters for large cinema shows and fashion together with Enrico Job (Pag20/21)
Still regie and posters for the Red Cross to government agencies.(P. 21)
Makes pottery painted vases and the pieces are signed and cataloged as original works which can be found in private collections around the world, from New York to Los Angeles.St. Petersburg etc. (P. 21)
As PROFESSOR of Painting in the ROLE of Artistic Disciplines for the Istituto d’Arte di Savona, Milan, Parma, Modena Casile was appointed by the MINISTRY of EDUCATION Commissioner for competitions to judge Pictorial Disciplines (p. 16).
Having won numerous awards for his work as screenplayer and artist he has held many meeting and debates on art and about cinema at the Otis Art Institue of Parsons of Design in Los Angels, as well as in other cities like Philadelphia, Oslo, Lausanne invited by the Italian Consul Barattolo in 2009) Reggio Cal. Parma. (Pag 5/16)
Several times was invited to the Maurizio Costanzo Show to talk about Art, Cinema and Teaching). .(P. 12)
Currently cooperates with various art galleries,( Los Angeles, Bogota, Santa Fè,, Paris, Bogota) … .(see website)
In 2011, the LUBIAM of Mantua (one of the most important fashion houses for men in the world) realizes a jacket and the lining is a reproduction of a watercolor painting by Casile. The jacket is presentedat the prestigious men fashion show at the Pitti Palace in Florence and later on the set of his film …(P. 21)
Born in Calabria, Bolognese of adoption, attended the academies of fine arts in Reggio Calabria, Bologna, New York, London, Paris, and Philadelphia. As a pupil of the Academy, first in Reggio Calabria (a pupil of Marino),then in Bologna (pupil of the Milesi and Contini) Casile won for three times in a row (only artist to achieve this honour of n.d.r review) the Lubiam of Mantua, the most important and prestigious European Prize of painting for students of all fine arts Academies in Europe.
Producing paintings in large dimensions, Casile has always privileged art exhibits at large and prestigious public spaces, (Royal Palace of Budapest, (p. 22/23.)Government Palace of Yaroslavl in Russia, Palazzo Re Enzo in Bologna …(P. 18) … etc …
To date, between private and public galleries, Assessorati alla Cultura, Municipalities, Provinces, Regions, Cultural Institutes, Consulates Casile has set up more than one hundred solo exhibitions in Italy and abroad. Many of his works are located in the city of New York, Philadelphia, Jenkintown (Pennsylvania), Paris, London, Los Angeles, San Francisco, Honolulu, Boston, Munich, Vienna, Montreal, Polanica Zdròj (Poland), Adelaide, Yaroslavl (Russia), Princeton (New Jersey) Budapest, and Bogota. (Pag22/23)
For many years Casile has practiced competitive athletics in track and field on the distance of 20 and 50 kilometres competing in the team Carabineri di Bologna multiple times world champions. He has participated in twelve Italian leagues absolute, six world championships and several international competitions.(P. 12)
He was also a football referee of the FGIC di Bologna.(P. 12).
For many years he has worked as a volunteer for 118 Public assistance with the city of Bologna (p. 23)