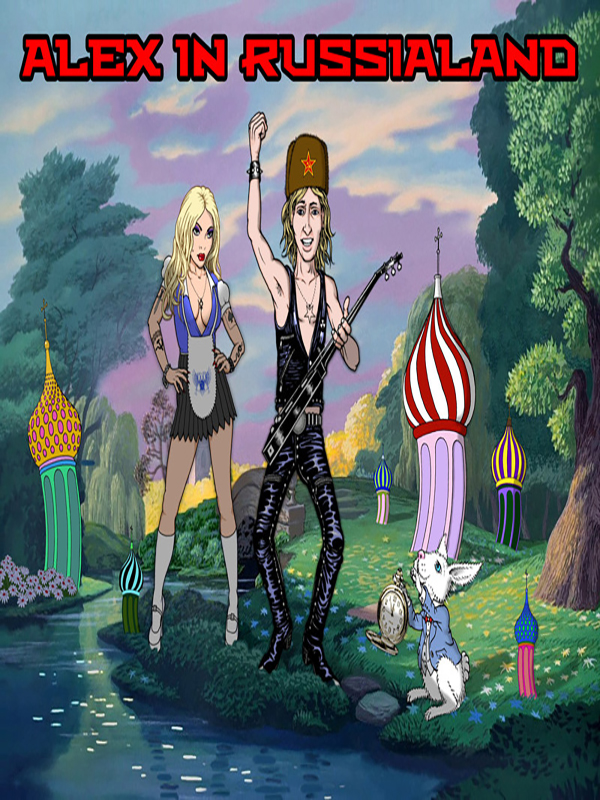 Alex Carlin is not Borat. He is a real person, and this is really his life. For seven years, Alex and his rock band have been on a nonstop tour of Russia—over 100 concerts per year. From Murmansk in the Arctic Circle to the Southern Black Sea, from the Far West Kaliningrad to the Far East Kamchatka, through the vast untamed Siberian territories so ripe for rock and roll, the ALEX CARLIN BAND gets to the next gig by train, not plane. The “Russian Rock-and-Roll Railroad” is a daily adventure of music, romance, fascinating characters and unsinkable people-to-people diplomacy. In 2020, a documentary movie was completed only a moment before the pandemic hit Russia, which would have blocked some of the traveling and concerts. But as fate would have it, the die was cast, the affair was consummated and here it is, the Russia you have never seen before: Alex in Russialand!

Alex Carlin, born in Chicago in 1957, is an American rock musician and film director.
He studied at NYU Film School from 1975 to 1976 with Haig Manoogian, the mentor of Martin Scorsese.
Alex has a degree in Russian literature from UC Berkeley.
He was a teenage member of the seminal 1970s California bands Psycotic Pineapple and The Rubinoos.
In 1984, “Little Demon”, a song co-written by Alex, was the feature musical number performed in the hit comedy film “Bachelor Party”, starring Tom Hanks.
In 1990, for six months, Alex extensively toured the Soviet Union with his San Francisco band Alien Beachhead, with bassist Bill MacBeath and drummer Peter Ffrench.
In the mid 1990s Alex played lead guitar for Cranford Nix.
In 2000, Alex moved to Europe, where he played over a hundred concerts per year for more than a decade, performing in almost every country. Concerts often included the renowned fusion drummer Atma Anur, known for his work with Journey. Alex also worked with the Scorpions’ bassist Paweł Mąciwoda.
In 2009, Alex became a Guinness World Records holder for Longest Solo Concert after playing 32 hours of rock songs in Radomsko, Poland.
In 2012, he formed the ALEX CARLIN BAND. For these 8 years, they have been touring all across Russia, performing in every region, as well as in the neighboring Central Asian republics. Alex directed several of their music videos.
For over a decade, concern about Climate Ruin (his coinage) led him to become the foreign correspondent on environment for the Center for Media and Democracy (CMD). He has reported from many United Nations climate conferences, and has presented his own climate restoration plan at both the Poland and Madrid conferences, as well as the 2020 BRICS (Brazil, Russia, India, China, South Africa) summit in Sochi, Russia. The plan calls for revitalizing Russian fisheries in the northwest Pacific, which greatly increases photosynthesis, which repurposes significant amounts of CO2, and thereby, to a great extent, lessens the greenhouse effect.
As he discusses in the film, Alex believes this plan offers a great opportunity for Russians and Americans to forge friendships and work together.
To make Alex In Russialand, Alex worked closely with the Russian cinematographer and editor Anatoly Goronesko.

The great Russian film director Dziga Vertov made amazing films at the dawn of cinema in the 1920s. Nobody was acting, but his flow of shots of the vitality of real life in Russia created a fantastic movie. This is what inspired my directing approach for “Alex In Russialand”. My camera crew brilliantly caught the magic that swirled around us as we toured Russia. Later, after I watched and made notes from every single clip from every camera, we made the story emerge by editing.

Our editing style was heavily influenced by Vertov and other early Russian masters of that editing style which they invented and gave to the world. They called it “montazh”.

I was also inspired by the filmmaking of Frederick Wiseman, who creates wonderful movies assembled and edited from his shots of real, unstaged found events.