It is a story about Salvation.

Jeff has been told he only has three months to live due to brain cancer, instead of feeling sorry for himself he writes a bucket list so he can live the remaining days full of no regrets.

Jane on the other hand is a despairing nurse who feels she can’t escape her daily trauma of being abused daily by her husband.

Unwillingly knowing how their actions can help complete each other’s lives.

What would you do if you were on borrowed time?

What will survive in the end — Body or Soul … 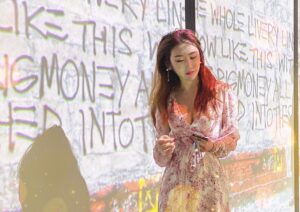 Angeline Wu has been involved in the film and media industry since the tender age of 17. She was born and raised in China but resides in Australia.

In 2013 Angeline launched her company AMG Media Production now based in Melbourne, CBD. The company produces films, TV programs and videos, offering an all in one service for clients.

AMG has achieved great success in multiple areas in the past five years. It’s expertise in video and film productions has gained positive feedback from clients and partners, while its professionalism has been highly recognized by the industry leaders.

At the age of just 25 Angeline directed and produced Australia’s first Chinese Variety Talk show AuMyGa. It was a great success with BBC purchasing a 10-year copyright agreement.

Preceding the success of AuMyGa, Angeline went on to produce many other films including in 2015, producing a tv episode Sweet Guy which was directed by by Hao Ran and jointly produced by Daohe Film. It is an Urban romance which is based on the emotional and career experience of several young people who found the true meaning of lives from love.

With her impressive honours achievements and her work ethic, Angeline is highly respected and regarded in her industry. She is driven by innovation and an undying belief in her team creativity yet remains humble.