Becca cares for her elderly father, Tim, who suffers from dementia and spends his days transfixed by a TV that he keeps tuned to static. Becca’s brother tries to convince her to place Tim in assisted living, which she resists, insisting that both her and Tim’s life is better with him at home. After returning from a tour of the assisted living facility, Becca finds Tim seems to have taken a turn for the worse. He pushes her to join him in staring into the static, and she must decide whether to continue humoring him. 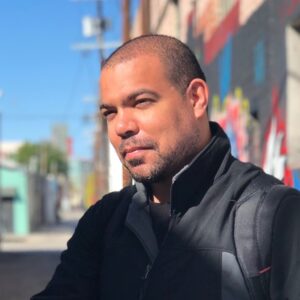 Stephen is an award-winning director whose films, including Mix It Proper (Best Comedy at the August 2018 Global Film Festival Awards, Platinum Award at the October 2018 LA Shorts Awards) have played numerous festivals across the U.S. His professional work includes videography and editing, corporate videos, TV commercials, and web documentaries, including several collaborations with the music project CHANT. In another life, he was responsible for global oversight of business management systems at Velocity Electronics, a leading distributor of electronic components.
His passion for film was stoked at a young age by the Discovery Channel show, “Movie Magic,” which looked at the craft of creating special and visual effects. His first foray into making films of his own came during his senior year of high school in the form of an independent study class which culminated in the production of a short film and an hour-long public seminar breaking down what he learned.
He studied film, media studies, screenwriting, and editing at the University of Texas at Austin, graduating with a B.S. in Radio-TV-Film, and went on to earn an M.F.A. in Film Production with Emphasis in Directing at Chapman University’s Dodge College of Film and Media Arts.

Live Up To Lost Time 不负流年